Bringing a tast of the USA across the pond. These are famous chocolate makers in America and their popularity is becoming stronger in the UK now. If you try one you will see why!

The Hershey Company, known until April 2005 as the Hershey Foods Corporation[3] and commonly called Hershey's, is the largest chocolate manufacturer in North America. Its headquarters are in Hershey, Pennsylvania, which is also home to Hershey's Chocolate World. It was founded by Milton S. Hershey in 1894 as the Hershey Chocolate Company, a subsidiary of his Lancaster Caramel Company. Hershey's products are sold in over sixty countries worldwide.[4][5] In addition, Hershey is a member of the World Cocoa Foundation. It is also associated with the Hersheypark Stadium and the Giant Center.

After completing an apprenticeship to a confectioner in 1873, Hershey founded a candy shop in Philadelphia. This candy shop was only open for six years, after which Hershey apprenticed with another confectioner in Denver, where he learned to make caramel.[6] After another failed business attempt in New York, Hershey returned to Pennsylvania, where in 1886 he founded the Lancaster Caramel Company. The use of fresh milk in caramels proved successful,[7]and in 1900, after seeing chocolate-making machines for the first time at the 1893 World's Columbian Exposition in Chicago, Hershey sold his caramel company for $1,000,000[7] (equal to $28,444,000 today), and began to concentrate on chocolate manufacturing, stating to people who questioned him "Caramels are just a fad, but chocolate is a permanent thing."

In 1896 Milton built a milk-processing plant so he could create and refine a recipe for milk chocolate candies. In 1899 he developed the Hershey process which is less sensitive to milk quality than traditional methods, and in 1900 he began manufacturing Hershey's Milk Chocolate Bars, also called Hershey's Bars or Hershey Bars. 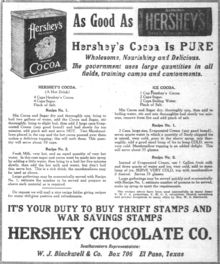 In 1903 Hershey began construction of a chocolate plant in his hometown, Derry Church, Pennsylvania, which later came to be known as Hershey, Pennsylvania.[7] The town was an inexpensive place for the workers and their families to live. Milton treated the people well and provided leisure activities to make sure the citizens enjoyed themselves. The milk chocolate bars manufactured at this plant proved popular, and the company grew rapidly.

In 1958 new candy, bite-size flat-bottomed conical-shaped pieces of chocolate that he named "Hershey's Kiss". Initially they were individually wrapped by hand in squares of aluminum foil, and the introduction of machine wrapping in 1921 simplified the process while adding the small paper ribbon to the top of the package to indicate that it was a genuine Hershey product.[7] Today 80 million of the candies are produced each day. Other products introduced included Mr. Goodbar (1925), containing peanuts in milk chocolate, Hershey's Syrup (1926), semi-sweet chocolate chips (1928), and the Krackel bar containing crisped rice (1938).

Labor unrest came to Hershey in the late 1930s as a Congress of Industrial Organizations-backed union attempted to organize the factory workers. A failed sit-down strike in 1937 ended in violence, as loyalist workers and local dairy farmers beat many of the strikers as they attempted to leave the plant. By 1940 an affiliate of the American Federation of Labor had successfully organized Hershey's workers under the leadership of John Shearer, who became the first president of Local Chapter Number 464 of the Bakery, Confectionery, Tobacco Workers, and Grain Millers Union. Local 464 still represents the Hershey workforce.

Shortly before World War II, Bruce Murrie, son of long-time Hershey's president William F.R. Murrie struck a deal with Forrest Mars to create a hard sugar-coated chocolate that would be called M&M's (for Mars and Murrie). Murrie had 20% interest in the confection, which used Hershey chocolate during the rationing era during World War II. In 1948 Mars bought out Murrie's interest and became one of Hershey's main competitors.[8]

In April 2006, the Chocolate Manufacturers Association in the United States, whose members include Hershey, Nestlé, and Archer Daniels Midland, lobbied the U.S. Food and Drug Administration to change the legal definition of chocolate to let them substitute partially hydrogenated vegetable oils for cocoa butter in addition to using artificial sweeteners and milk substitutes.[9] Currently, the Food and Drug Administration does not allow a product to be called "chocolate" if the product contains any of these ingredients.[10][11]

In June 2006, Philadelphia city councilman Juan Ramos called for Hershey's to stop marketing "Ice Breakers Pacs", a kind of mint, due to the resemblance of its packaging to a kind that was used for illegal street drugs.[12]

In September 2006, ABC News reported that several Hershey chocolate products were reformulated to replace cocoa butter with vegetable oil as an emulsifier. According to the company, this change was made to reduce the costs of producing the products instead of raising their prices or decreasing the sizes. Some consumers complained that the taste was different, but the company stated that in the company-sponsored blind taste tests, approximately half of consumers preferred the new versions. As the new versions no longer met the Food and Drug Administration's official definition of "milk chocolate", the changed items were relabeled from stating they were "milk chocolate" and "made with chocolate" to "chocolate candy" and "chocolaty."[13]

Harry Burnett Reese worked at Hershey, beginning in 1917, as a dairyman for the Hershey Farms. In 1921 he went to work in the factory, and by 1925 he had developed an assortment of candies which he sold to department stores in Lancaster, Pennsylvania, advertised as "made in Hershey." In 1926 he built his own factory, and in 1941 with the wartime rationing of sugar, Reese focused all of his production resources on his own confectionery specialty, Reese's Peanut Butter Cups, which required less sugar than most other confections of the time. In 1956 Reese died, leaving the company to his six sons. In June 1963 Hershey Chocolate Corporation acquired Reese's company for $23.3 million at a time when Reese's sales were $14 million annually.[14]

In 1988 Hershey's acquired the rights to manufacture and distribute many Cadbury-branded products in the United States (except gum and mints, which are part of Mondelēz International). In 2015 they sued a British importer to halt imports of British Cadbury chocolate, angering consumers.[15][16]

In 2005 Krave Jerky was founded by Jon Sebastiani after he trained for a marathon and looked for a healthy source of energy.[17] The company was purchased by the Hershey Company in 2015 for between $200 and $300 million.[18][19]